“This building really represents the magic of live theatre, the magic of human connectivity, the magic of being able to collaborate with fellow artists.”
-Shannon Jones, Associate General Manager at TheatreSquared 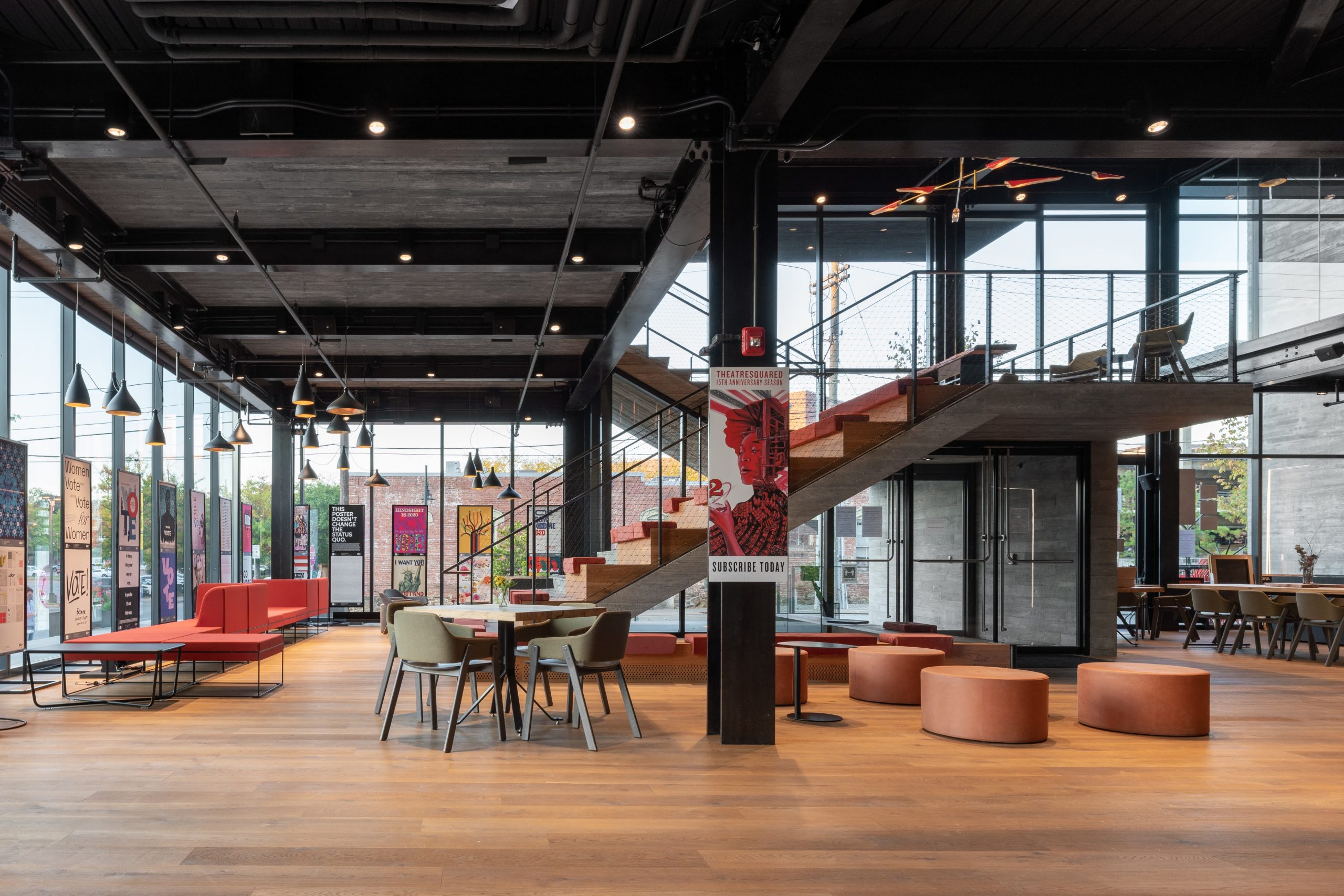 TheatreSquared is a professional theatre that has become an iconic venue in Northwest Arkansas, where the arts are highly appreciated. It was a long-time dream of Artistic Director Bob Ford and his wife Amy to bring a professional theatre to Fayetteville. When they joined forces with another couple from Seattle looking to begin a children’s theatre in the area, their dream came to life. The original idea was for the theatre to provide entertainment for both adults and young audiences. This, in addition to the founders’ desire for the venue to be on the Fayetteville square, gave TheatreSquared its name.

After two years of planning and focusing their vision, TheatreSquared partnered with the Walton Arts Center to begin production. A free-standing multipurpose room on the performing arts center site was the theatre’s home for 14 years. The space featured a wide stage and house, and only six rows of seats. This closeness between audience and actors allowed for a unique, intimate theatre experience that came to define what TheatreSquared represents today.

“[The building] is very much designed for you to read it like an open book or understand it like a well-made play.”
-Martin Miller, Executive Director at TheatreSquared 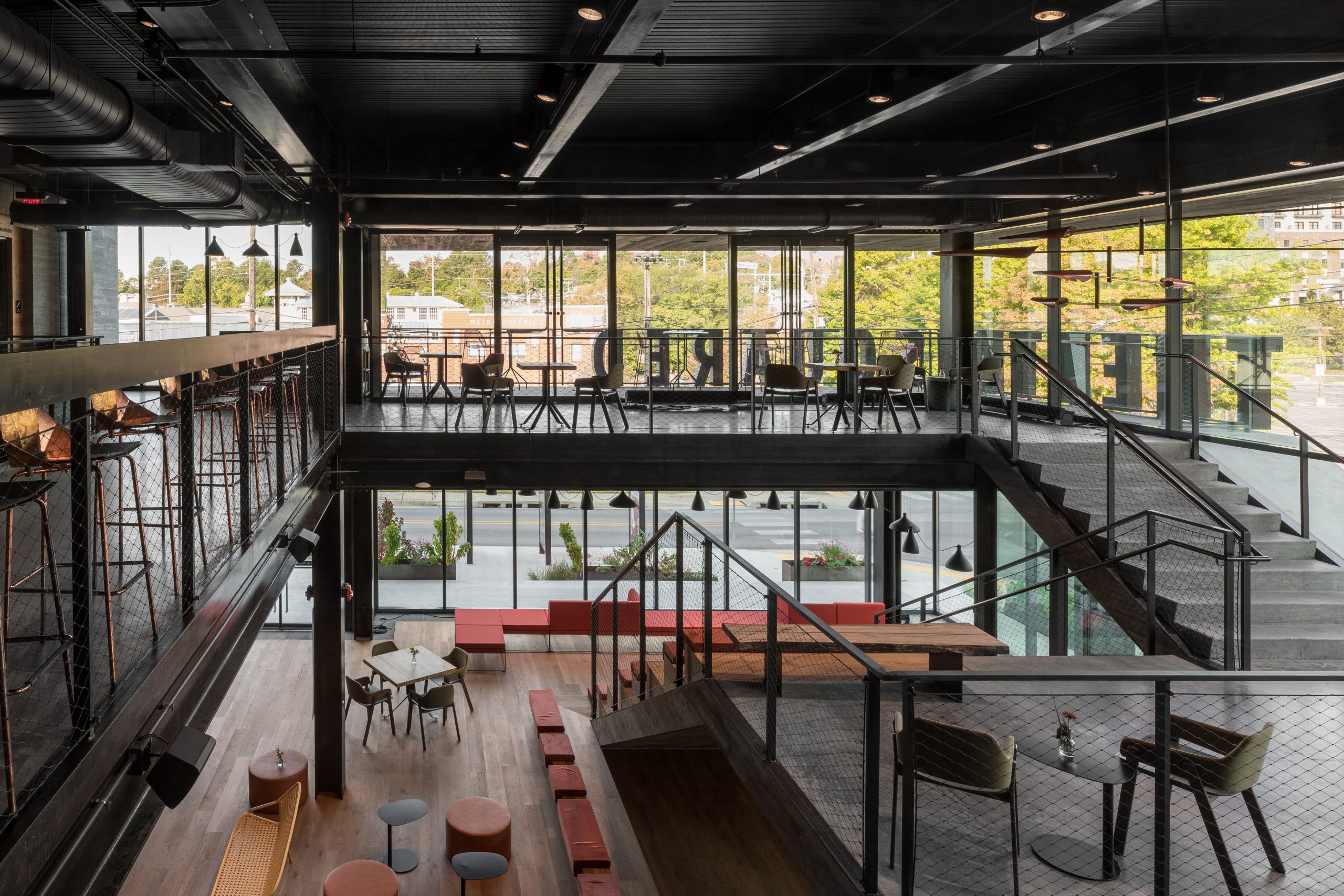 Vision for a New Home

Over the years, TheatreSquared became a beloved part of the Fayetteville community. They eventually began to outgrow the space they had come to love, and decided it was time to build a new home for the theatre. They shared their ideas with The Walton Family Foundation, with whom they had a long-standing relationship. The Walton Family Foundation was supportive and in agreement with the need for the project. They presented TheatreSquared with the opportunity to be part of their new program called Design Excellence, which supports 2-3 public building projects per year. The foundation graciously offered to fund the entirety of the design costs and one-third of the construction costs for TheatreSquared’s new building through this program.

TheatreSquared was given the rare and exceptional opportunity to create and design a space that was completely reflective of their values and character. Architecture firms Charcoal Blue and Marvel joined forces to form a stellar design partnership. Before the TheatreSquared team ever saw a design rendering, Marvel spent ample time upfront speaking with them about their ideas and values. As TheatreSquared has always been a place for the community, they knew they wanted to maintain the closeness to the stage that their audiences had come to know and love. In addition, they wanted to create a space that was warm, transparent, and reflective of the human experience, while being as economical and sustainable as possible throughout the building process. With these goals and values as the focus, the design team collaborated to create the perfect space to meet the theatre’s exact needs.

“Architecture is a beautiful way of looking at the world, because you’re really taking in all the pieces.”
-Jonathan Marvel, Principal at Marvel 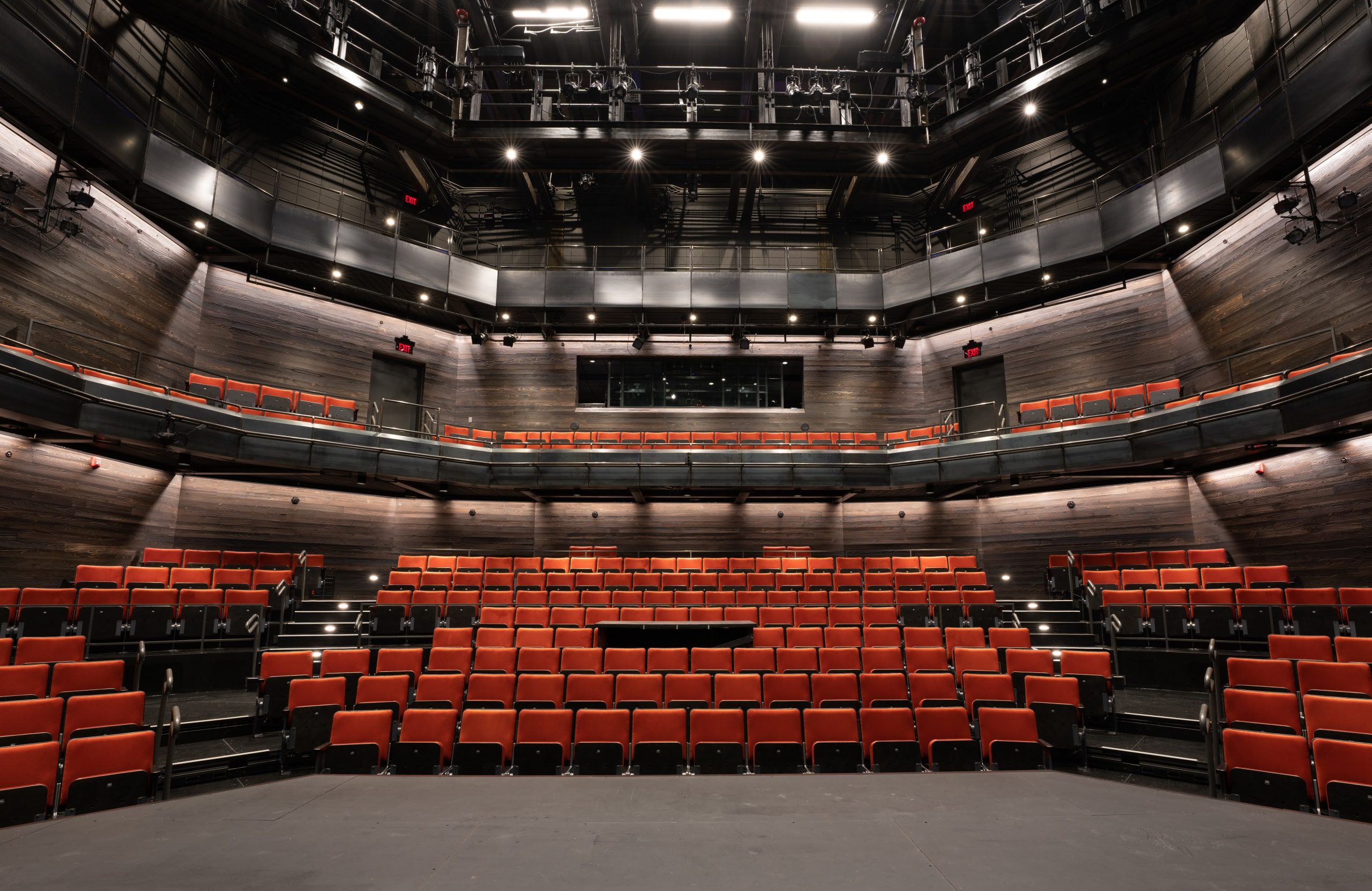 As the vision became a reality, the design and building teams were met with challenges along the way. The greatest obstacle was one that TheatreSquared had experienced for years at their previous space, not far from the location of the new building. There is a train nearby that runs during performance times. The loud sound of the train passing as well as the rumbling vibrations disrupted the intimate experience of productions. For this reason, the design team was tasked with creating a space with perfect acoustics that could reduce resonance and completely block any outside sounds. The solution was creating 3 separate theatre boxes made of solid concrete, the best material for blocking sound. The concrete walls were then layered with wool mineral insulation, a stud wall with more insulation, and finally a finished wood. While it was difficult, the end result was acoustically perfect.

Another challenge was with the appearance of the concrete itself. TheatreSquared wanted the new building to be warm and inviting, but concrete naturally looks very cold. To make the outside of the building look warmer, wood impressions were made in the exterior concrete, making it look like natural wood. Morris Vines, Project Superintendent for Baldwin and Shell Construction, explained that this step in the building process was difficult because the concrete was an exposed element. Since it would be seen, they had to get the wood impressions exactly right. He described the precision necessary to make all the materials align as the most difficult part of a project with so many design elements.

Additionally, the design team had to find a way to add house seating in the theatres to accommodate expanding audiences while maintaining the closeness and connectedness that was characteristic of a TheatreSquared production. They decided to configure the theatres to be of a similar length to their previous space, but made them wider so that the rows could be longer. This allowed for the addition of 100 seats without having to add many rows. The new theatres also include a second floor circle level adding even more seating in a way that still keeps the audience immersed and connected.

“We wanted people to reach out and touch the materials as they walked through the building.”
-Martin Miller, Executive Director at TheatreSquared 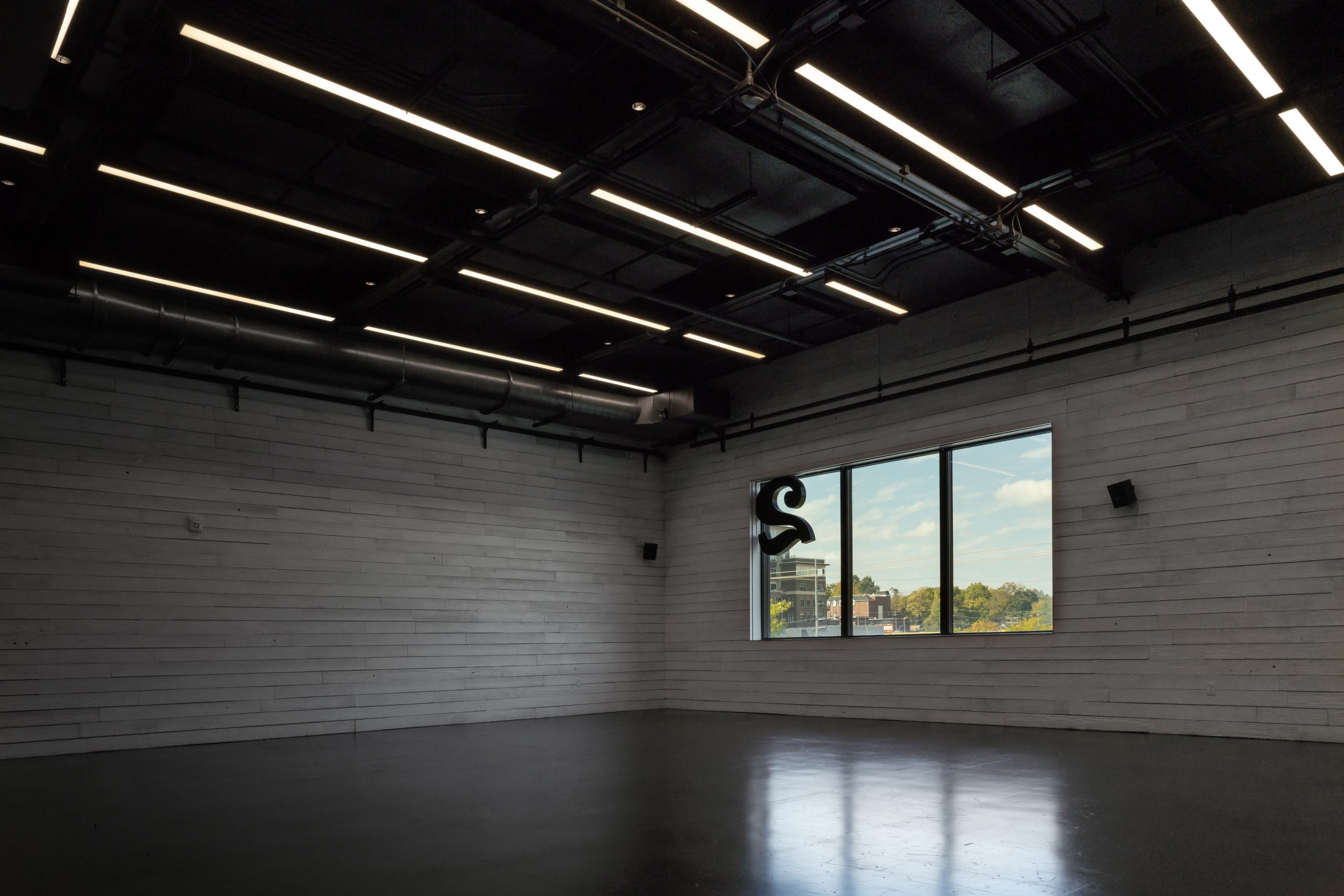 While the high level of design that went into this project brought challenges, the end result was worth all the difficult work. Many of the most impressive features of the new TheatreSquared building are due to the selection of interesting materials used in unique ways.

Kebony Shou Sugi Ban cladding charred by Delta Millworks complements the concrete on the exterior of the building. Kebony was selected for its sustainability, durability, and ability to withstand weathering over time. Shou Sugi Ban is a Japanese charred wood technique, and this finish adds additional benefits of protecting the wood from rot, decay, movement, and insects.

TheatreSquared was committed throughout the design and build process to being as sustainable as possible. They reclaimed and reused several materials to lessen their waste along the way. For instance, the boards used for the wood impressions in the exterior concrete were repurposed and used to clad two of the interior rooms. The team even used the trees that were cut down on the build site to make tables, chairs, and benches to go inside the theatre. They purposely selected materials that had a connection with Fayetteville and Arkansas in general.

Each of these conscious choices helped to achieve the goal of representing wood at every stage of its life- from raw, to finished, to charred. The materials selected will look even better over time, and will quickly show that people have interacted with them. Process is important in the arts community, and that theme is displayed in the intricate design details of TheatreSquared.

“We love being the place to cross-pollinate and connect Northwest Arkansas with the rest of the country.”
-Bob Ford, Artistic Director at TheatreSquared 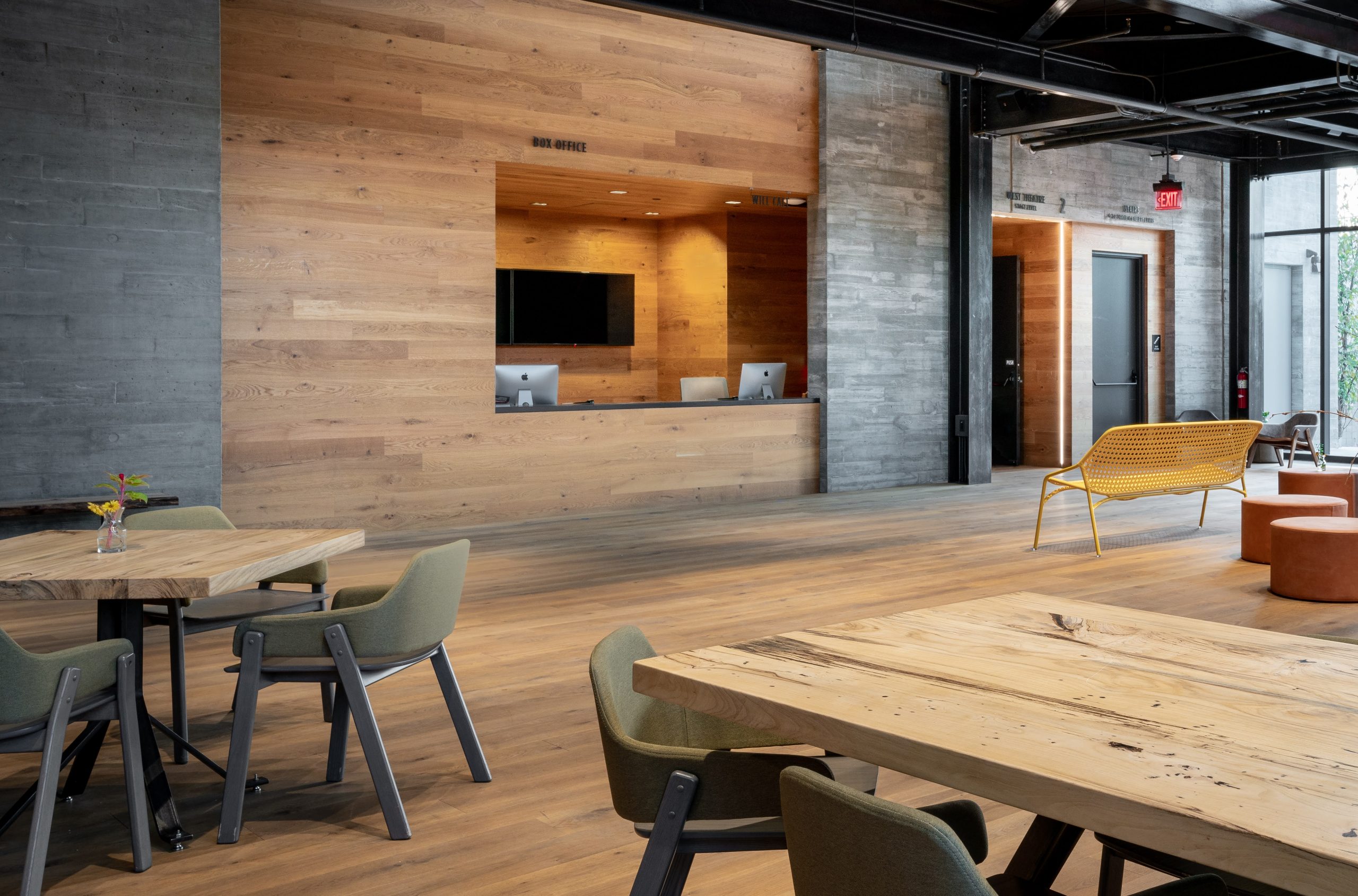 TheatreSquared opened its new location less than a year before the arrival of the COVID-19 pandemic, which has impacted the production schedule over the last year and led them to turn to livestream performances. Excitingly, the theatre is reopening its doors for in-person performances in April! They will be moving to a hybrid model, where they will continue digital streaming performances as well as offering live shows. The future of TheaterSquared is bright, as they remain an integral part of the Northwest Arkansas community. 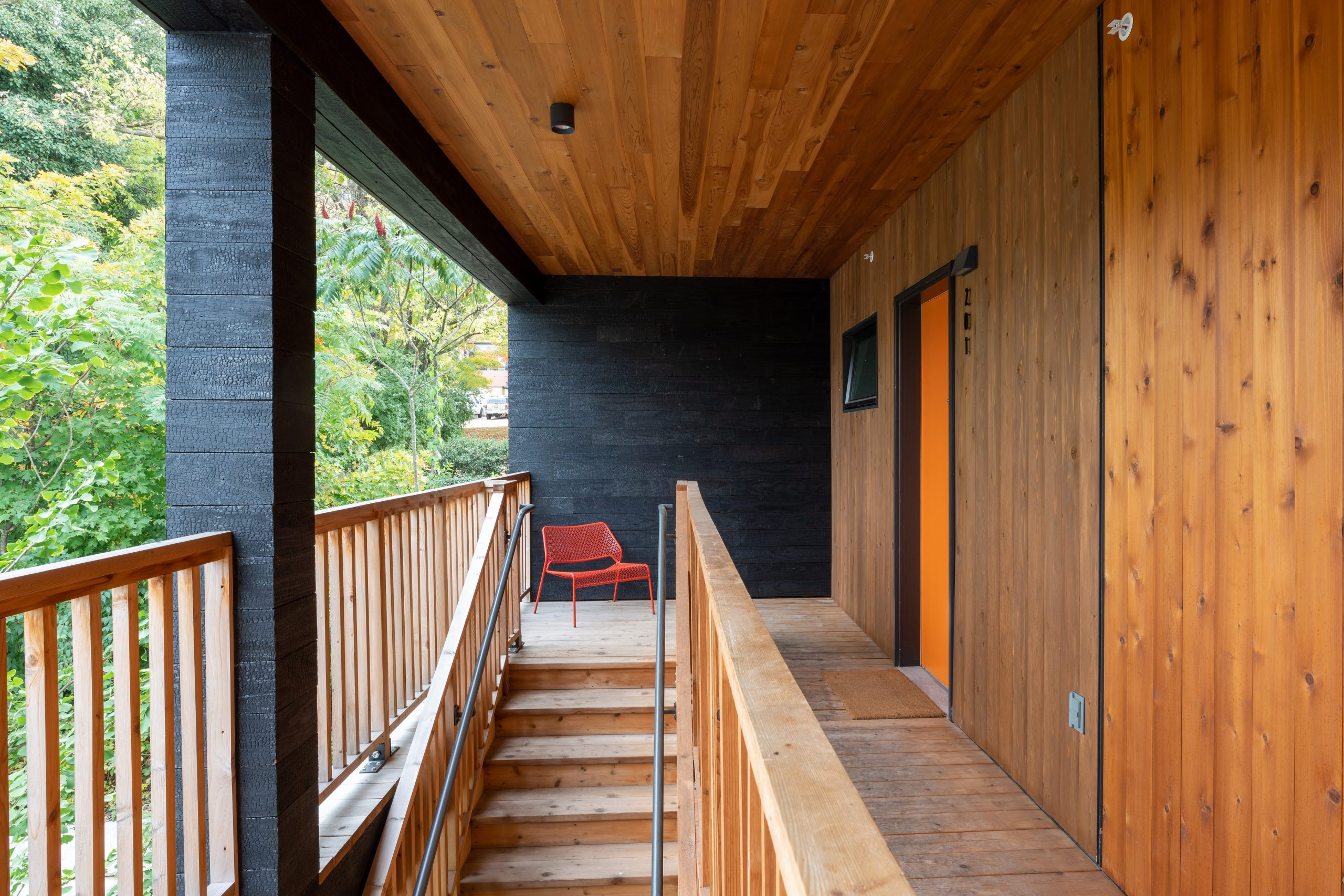